Construction at Colfax and Napier started today. Napier is closed to all traffic at the east side of Colfax. Through traffic is following a detour along Colfax, Nickerson, and M-139. Access for local traffic along Napier between between Colfax and M-139 is available from M-139.

This road closure is planned to continue until the middle of next week. Pavement removal in the intersection has been completed and watermain installation has begun. Watermain installation will continue across the intersection tomorrow. After the watermain has been installed and leak tested, the process of replacing the pavement can begin. Concrete pouring in the intersection is planned for later this week. The concrete will have to harden for at least three days and an asphalt surface will be paved before the road is reopened to traffic. 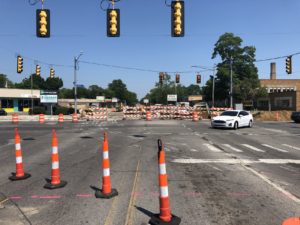