Musings on 100-Year Floods: From the Waterlogged Mind of a Civil Engineer 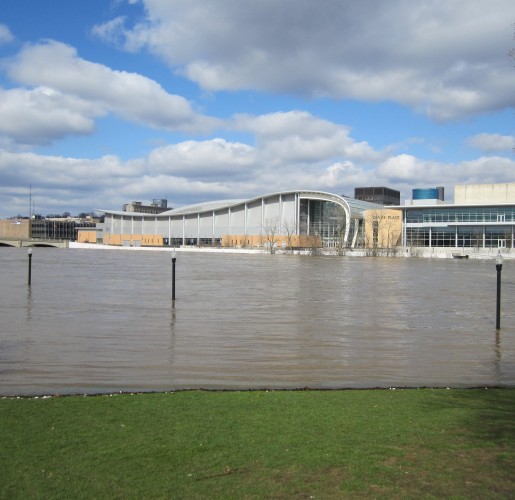 Unlike many Grand Rapidians, I missed the worst of Grand Rapids’ Great Flood of 2013. I was in Clearwater, Florida, reading the national news about our flood from the safety of my beach chair. Being in a relaxed and contemplative state, I began to ruminate about “our” flood in terms as only a civil engineer could.

To whit: The Grand River at downtown Grand Rapids saw its highest water level in over 100 years, but it wasn’t a 100-year flood.

A 100-year flood is one whose flow has a 1% (1 in 100) chance of occurring in a given year. Statisticians study historical flood records to determine mathematically the magnitude of a 100-year flood.  Prior to 2013, Grand Rapids’ weather statisticians figured that the flood with a 1% chance of occurring in a given year is larger than the one that caused the highest water levels we’ve seen downtown in over 100 years!  In reality, the flow we saw in the great Grand Rapids flood equated to only a 16-year flood according to Mark Walton from the National Oceanic and Atmospheric Administration (NOAA) National Weather Service.

Why, then, was the river so high? One word: floodwalls.

The floodwalls channeling the Grand River through downtown Grand Rapids haven’t been there for 100 years, and they raise the water level as the Grand River races between them to a more natural setting downstream. The walls “pinch” the river’s otherwise wide floodplain in this heavily-developed area, increasing both the river’s surface level and its velocity between them. Mayor Heartwell credited the floodwalls with saving the city from a massive flood.

Currently in draft form, FEMA’s updated Grand River floodplain maps show the Great Flood of 2013 remained within the 100-year floodplain because, as explained in the previous paragraphs, it was less than an “official” 100-year flood.

Another irony is that there were no recorded 100-year storms directly preceding the Great Flood of 2013. A 100-year storm is one which has a 1% probability of occurring in a given year. The “storm” is usually rainfall, and in Grand Rapids it takes 6.15 inches of rainfall in a 24-hour period, or 2.8 inches in one-hour, to qualify as a 100-year storm.

Besides rainfall, a river’s flood level depends on the beginning river depth before the storm and the extent of existing ground saturation. Also, an intense rain may only occur over a small portion of the overall watershed. It’s possible to have a 100-year storm in a dry watershed and not create a 100-year flood. And, as in Grand Rapids’ case, it’s possible to have less than a 16-year storm create a 16-year flood with already-saturated ground and high river levels.